Be one of hundreds of people across fifteen cities and five countries, simultaneously bowling for dollars in support of Singers Taking Action Reaching Souls.

Please join us in supporting The S.T.A.R.S. Vocal Ensemble’s International Ambassadorship.
Our next ambassadorship is an Asian Tour, which includes concerts in Malaysia & Hong Kong. 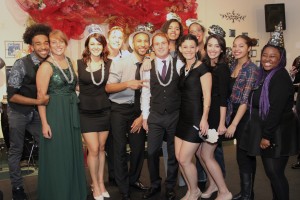 What better way to ring in the New Year than a gathering of Lightworkers in Las Vegas ready to jumpstart 2016 with a high voltage charge of love and light? The answer: there is no better way. We proved it on December 31st as all the S.T.A.R.S. (Souls Taking Action Reaching Souls) converged, 50 strong, on our beloved home in Las Vegas, A Place for Miracles. On the surface, it seemed like our usual party activities of singing, line dancing, feasting, game-playing and of course, Bingo, but there was more going on in there than meets the eyes. I could feel the energy pulsing through each and every being as we communed and allowed Spirit to play us for the evening. Yes, we were there to reminisce about the year past and intend for the year to come, but it was the palpable presence of everyone in the moment that created the magic that night. I thought, “Is this what it means to be and see only God?”

At 11:55pm, we cut our line dancing lesson short to don our New Year’s caps and grab our blowers and a glass of sparkling cider. The countdown: 3,2,1…Happy New Year! You know how you are supposed to kiss and hug any person near you at that point? Well, you have never seen such a hugfest in your life. We love to hug and kiss anytime but this felt more like a true union of souls dedicated to making this next year the best ever. The hugs were the handshakes sealing the contract. We were blessed with an inspirational toast from Master Teacher Isis, a chanting of our “Isis Party” mantra and then back to the dance floor. That was just the start of New Year’s day.

We went to our hotel for a “nap”, met for breakfast and then back to A Place for Miracles, for the first circle gathering of 2016. As I sat in that circle, I felt my whole body buzzing, (in fact, so much so, that I checked in to see if I ate too much sugar at breakfast).  Seriously, it was as though my being was being played and vibrated to a whole new level that I would not be able to contain (good news!). The S.T.A.R.S. sang “I Believe” and our musical heart surgery was performed with laser precision through our voices and into the hearts of each circle member. This is what it feels like to be an instrument for God.

We spent the majority of the circle time sharing our highlights from 2015. As usual, we told amazing tales of travelling the world and having experiences that blew our minds. However, it was not the actual doing that was the highlight but the wholehearted union that we experienced with everyone we touched through our travels and the bonding with each other that stayed with us. We are each on an individual journey to that end goal of knowing ourselves as One, through the collective Christ consciousness. That may sound like a lofty ideal, but we are quickly approaching that point, and when we do, watch out! The world will never be the same. 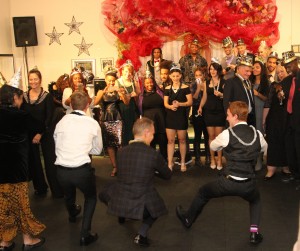 Once we had set the tone for the coming year, we then went back to the nonstop party. The rest of the weekend continued in the same fashion with movies, games, more feasting, and lots of communing. On Sunday we had the pleasure of hearing Nuhjume (the trio from the S.T.A.R.S.) perform at the Center for Spiritual Living and then again at A Place for Miracles’ Sunday service. Phil Flowers inspired us with a sermon of songs and Nuhjume brought it home by “Turning Up the Music”. Lana, our fabulous host, led us through a series of line dances and her son, Christopher, and his wife, Melissa, showed us the beauty of union through salsa and merengue dancing. We concluded the weekend with a last supper and a few more songs and skits.

We are all physically back in our homes now, but I know that the knot created that weekend is tied tightly and will not be undone. 2016 is the year for allowing Spirit to have Her way.  No more agenda, judgments, worries, planning, and scheming.  We are excited to see what Spirit intends to create through each one of us both individually and collectively, as we stand as the Accomplished, being and seeing only God.

What does it look like when 50 lightworkers board a ship for a week? Fun, a whole lot of it! We, at Circles of Light Ministries, look forward to our annual family fun cruise because, for seven days, we flood our captured audience of 3000 with light and love like they have never felt before. Every year, we watch whole shiploads of people transform as we fulfill our charge of “be and see only God”.

What does fun look like for us? We commune in dining halls eating, laughing and playing “Name that Tune”. We meet in lounges to sing, line dance (and even tap dance), and play games (Bid Whist and Crimp were the favored choices this year). We get off the boat at the ports and swim, snorkel, tour, shop and play beach games (Spikeball voted #1 beach game). Do you get the idea? The result is nonstop laughter and joy that is palpable to all on that ship.

We are always being told to teach by example, and our best example is our master teacher, Dr. Carolyne Fuqua.  One powerful way she reaches our hearts is through what she calls, “musical open heart surgery”. I was blessed to experience this recently as Dr. Carolyne performed with the trio from the S.T.A.R.S., Nuhjume, on the Carnival Glory. The house was packed with lucky cruisers who were hit with an hour and a half of nonstop uplifting harmonies, lyrics, and sidesplitting laughter. As I ran the music from the sound booth, I had a great view of the audience. I watched constant standing ovations, dancing in the aisles, comments on how beautiful, funny and talented they are, and most importantly, smiles on every face as they left. I was most impacted by my colleague in the sound booth, a Romanian gentleman who has been running shows on the ship for over two years. Grinning wide, he commented on what a pleasant surprise this concert was as I watched him up his game to the mastery he was experiencing on that stage. 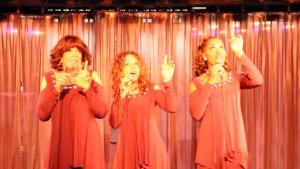 We know that the surgery and our mission on the Carnival Glory was a success. Hearts were opened and widened. How do we know? By the last day, we could not leave that ship without receiving a bombardment of hugs, and comments of appreciation for the shower of love every passenger and crew member received. We look forward to sailing the high seas again in 2016.

Katherine Dignan
Alto from the S.T.A.R.S.